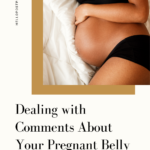 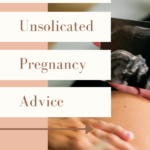 One expecting mother shares how she navigated unwanted comment and unsolicited avdice about her growing belly, changing body, and more during pregnancy.

Most pregnant people agree that carrying a baby can often feel like a free pass for strangers, friends, and family members to touch without asking and speaking without thinking.

Here’s how you can deal with this behavior and respond constructively.

The story of one mom-to-be

We were sitting in the backyard after work one day, having a glass of wine. My husband and I own a Day Spa, so often, after a crazy day of dealing with the public, we would sit out back to relax, share stories, and reconnect.

Except this day was distinctly different. This day we were talking about having a baby.

We had been together for six years before this conversation, and truthfully, we were both content with just working on our careers. Yet, something had changed, and here we were having “the baby” conversation. “I think it’s time we start trying to have a baby,” I say to my husband.

“A baby?!” his big blue eyes stare back at me. “A baby, it’s time; we’re ready.” Excited about the idea of having our own family, we spent the rest of the evening thinking about names and life as we imagined it might be with a baby in it.

Well, flash forward six years, two IUI’s (Intrauterine Insemination), 75ish negative pregnancy tests, and the resolution of becoming a crazy lady that will most likely own 12 French bulldogs and live her life in isolation, I got pregnant. I had convinced my husband to sign up to do IVF (Invitro Fertilization).

We were set to begin on December 28, 2020. I was scared. I had read every single story on google, and I was nervously hopeful but afraid of yet another letdown in this chapter.

And then it happened: I’m pregnant!

We waited the traditional three months before we told anyone. I wanted to make sure this pregnancy wouldn’t turn into another empty story that I would have to carry with me in my life.

March of 2021 had arrived, I could tell my clients and friends who had always been on this journey with me that I was finally pregnant. I always believe in being open with people, especially women.

Excited to share that I was pregnant, I was shocked at the comments I would get back.

Most women were ecstatic. But others would say things so outlandish that I had to figure out how to handle my overflowing hormones and manage my responses and not take things to heart, which is a more straightforward thing to be said than done.

The words circled in my head long after hearing them.

Now, these are just a few examples of the things I heard as I was trying to adjust to being pregnant, adjust to the changes I was feeling and seeing in my body, and adjust to the thought of my marriage and my life changing.

Why do people say things to pregnant people?

My first thought was to take it personally and take it to heart. These clients that I had known for years were just giving me advice. Wrong.

It occurred to me that these women are most likely projecting the poor advice others showed them while pregnant onto the next pregnant woman in hopes that it helped.

Maybe that’s the eternal optimistic side of me, trying to justify what I was hearing, but the alternative made me sad. It upset me that in these incredible few months, where your world is inevitability changing, we critique women, give unsolicited advice, and treat and observe them like we would to zoo animals.

So, I had to try to change that.

The next time one of my clients said something bizarre to me, instead of feeling hurt, I would say, “I don’t worry about gaining weight or my marriage afterward; my focus is just on having a healthy pregnancy. The rest will fall into place.”

Changing the tone and the direction of the conversation also changed the client’s demeanor. “You’re right,” she would say. “I wish I had done that in my pregnancies.”

A better response to comments on pregnant bodies

“Stand up, let me see how big you’ve gotten.” I would hear often.

At first, I was excited to show off my little bump. But as that bump got more prominent, standing up became more of a struggle, and standing there, I felt more like an exhibit at the local zoo.

So, I would say, “Absolutely not! It took me ten minutes to get comfortable in this chair! Don’t you worry, the bump is getting bigger by the day! So, tell me, what’s new with you?”

Again, letting the client know I wasn’t going to entertain this any longer kindly changed the direction of the conversation. So often in this world, we are quick to say things that I genuinely don’t believe we mean.

While dealing with the public in a business setting is never an easy task, changing the direction of the conversation is a skill that we must master to protect our own mental and emotional stability.

We are inundated with information, photos, thoughts, opinions on every aspect of life. How we live it, how we should be living it, how perfect strangers online are living it, and how we will never measure up to what we have decided is perfection in this world.

Thanks to our current climate, the amount of pressure we put on ourselves is more than we ever have. It’s unsustainable.

Now, pregnancy is such a sensitive topic on its own. If we could build a community that lifts women for who they are and praises them for the job that they are doing, I feel like our society would start to heal.

So, I’ll leave you with this thought. Change the narrative the next time someone says something off-color or leaves you feeling stung.

Please find a way to show whoever said that to you that they will not receive a pass this time. We must change the pattern to create a new world.

The solution is simple: communication and kindness. Combine the two with the people around you, and we are sure to see a change not only in ourselves but in our society.

Kristina's dream is to live in a world where we lift women up and support them like queens. After years of struggling with infertility and finally having a successful pregnancy of her own, she realized there is much we need to change in this chapter of our lives. Her passion has quickly become helping other women go through this phase and hopefully bringing a little laughter and love along the way.

How to Create a Second Baby Registry on Amazon

How to Navigate Postpartum in a Pandemic World

Exploring the Intersection of Spirituality and Early Motherhood

The Emotional Aspects of Infertility (And the Impact on Relationships)

Signs and Symptoms of Intrahepatic Cholestasis of Pregnancy: One Mom’s Story