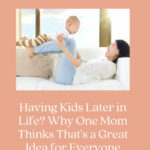 You’re not alone if you’re considering waiting to have your kids until you’re older than 30. This mom shares her opinions on why having kids after 30 proves to be highly beneficial for everyone.

There is a show on Netflix currently entitled, The Ultimatum. The premise is a group of five couples, one person in each party has presented their partner with the daunting life choice of marrying me, reproducing with me, or learning to live without me.

No one on this show is over the age of 30. From a nearly 32-year-old perspective, I stood confused from the first episode. It’s an understood fact that biologically the best time for women to have children is in their 20s.

However, another point is that the human brain is not fully functional until age 25. One could argue that these facts are contradictory, but only a mother could tell you why these facts reign true.

Motherhood after 30: one mom’s choice

After completing college, I realized that I am a woman who was very adamant about waiting until 30, so I couldn’t understand the rush.

The journey of motherhood takes so much more than just self-sufficiency because after gaining the right opportunity, that’s attainable.

What’s not easily accessible is everything else that will make you feel like you know what you’re doing.

“If I could wave a magic wand, I wouldn’t allow Black people to reproduce any time other than the ages between 30 and 35.”

Dr. Frances Cress Welsing, author of The Isis Papers: The Keys to the Colors

Released in 1991, Dr. Wesling has explored the ideals of White supremacy for over 18 years and studied racism for 40 years.

While speaking to a Sociology of African Americans course at Howard University, the Dr. suggested that interested parties wait until they’ve reached ages 30-35 to allow themselves prime self-development.

Most women interested in becoming mothers have given themselves an age where they think they’d be ready. In the ’90s, it was mid to late ’20s, and in today’s climate, it’s closer to 40 (or whatever the age of not being dominated by the economic system falls).

30 is not too old to become a mother

Allow me to be the first to scream from the Appalachian mountains that, contrary to popular belief, 30 is not old. I believe you’re merely just getting started.

I am the eldest child of a single mother of three. Nothing in my heart wanted children, marriage, or anything that resembled commitment until I was old enough to experience men in a romantic capacity.

It wasn’t until I checked off my non-negotiable life events list:

I started to welcome the possibilities of love and family because I had already secured that I wouldn’t struggle as my mother did. Waiting until 30 may seem too late due to the normalization of women becoming mothers in their teens.

Witnessing society telling women that their youth is dwindling makes the idea of motherhood seem as if it’s on a rapidly ticking clock.

Furthermore, the benefits of being more wise, knowledgeable, and patient fail to get the credit they deserve when considering starting a family.

Psychologically after becoming a mom, you will be a different person, so the target age of 30-35 could provide a mental and financial cushion. You know more of yourself and what you want in a partner, and your focus on career orientation is much more stable.

You’ll still have the energy of a young person, and by the time the children are 18 and set to go off and blaze their trail, you still have time to enjoy the fruits of your labor.

Storie’s thoughts on motherhood after 30

Age 30 provides an unspoken clarity and understanding that gives a more profound sense of purpose.

For example, I knew early in my pregnancy that I desired to nurse my son until he was 1. My mother had me when she was 19 years old, and even though I have two siblings, she had them so long ago (23 and 21) that things have drastically changed in motherhood.

However, I couldn’t learn from her that I had the know-how and access to join new mom groups and research specific things I wanted to know about breastfeeding and postpartum recovery. My mother had no clue that post-natal vitamins that assist with the increase of milk production existed, but I did.

From that knowledge, I achieved the goal I set for my child without worrying about what I didn’t know. These things provided more ease and comfort that I can imagine I’d not have had I not waited.

And there’s research to back it up

The National Library of Medicine details existing studies showing that older mothers’ happiness increases around and after childbirth. However, the effect does not exist or is short-lived for younger mothers.

Critical sociodemographic pathways associated with postponement of childbearing might compensate – or even more – for the biological disadvantages of reproductive aging.

Before I decided to become a mom, I took the liberty of beginning my therapeutic journey in my 20s because I understood that I had some trauma to be healed.

Therapy has benefited my child because my heart and mental stability are intact. I want to think I possess the knowledge to lead him down a healthy and unbiased road of emotional intelligence.

Read next: Five Reasons Moms Avoid Therapy (Even When We Know We Need It)

Of course, there is one major caveat to consider.

Baby Center informs moms that fertility decreases significantly for most women as the decade progresses. That’s why fertility experts caution women in their 30s not to wait too long, especially if they want more than one child.

Ultimately, the choice is yours

Allow me to insert my disclaimer; there’s nothing wrong with deciding to become a mom before 30. Children are blessings at every age, but for those interested but just needed the cold hard facts to back up your choice to have babies later in life, here you go. I hope this helps.

It’s not impossible, and you’re doing your baby an excellent service by getting yourself together first. Besides, we all know that time is a social construct. Right?

You’re as old or young as you feel. 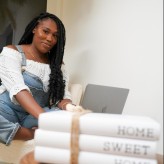 Storie Stone is a storyteller and content creator hailing from the Windy City and based in Atlanta, GA. She covers lifestyle entertainment which intersects with culture and high influence. Having been a lifestyle contributor and relationship columnist for True Star Digital, she has covered a wide array of social-cultural topics from motherhood to relationships. She is the author of two books, including Nine, an urban romance based on a true story. She currently writes for ATL Uncensored, Hello Postpartum, and her blog, Literary Architecture.

The Secrets to Work-Life Balance for Working Moms

Meet the Woman Behind In Kind Boxes

Stay-at-Home Mom with Resentment Towards Your Husband? Try This

Co-Parenting with Different Parenting Styles? Here’s How to Make It Work

Why the Invisible Load of Motherhood is Breaking You

Common Misconceptions About C-Section Recovery (and What to Know Instead)