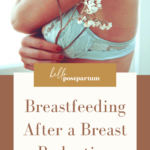 One mom shares her story of navigating breastfeeding after a breast reduction, and what she wishes she knew before her augmentation surgery many years ago.

I didn’t buy any bottles. I didn’t know anything about formula types. I only knew how to feed a baby a bottle from what I’ve seen around in movies. Why would I need to know those things? I am breastfeeding.

But, the reality is that I belong to the group of “those who wanted to but couldn’t.”

Editor’s note: the story below is one mom’s story. It does not mean that all who have chosen breast reductions will face the same struggles, but by sharing her story, we hope to help those in a similar spot feel validated in their experience.

My story on breastfeeding after a reduction

When I was 19, I had a breast reduction.

At that time, I was young, in college, and I was not thinking about my chances to breastfeed. That was absolutely nowhere on my radar. But I do recall the doctor saying something about “breastfeeding” and “it won’t change anything.”

Fast forward to the day my son was born. Breastfeeding was going as I expected, and he latched on without issue and appeared to be doing well. He fed all day and night.

I remember feeling utterly exhausted. But he was my firstborn, I was home with him, and I was in love. I loved breastfeeding.

Then, my son’s weight started to drop

He lost weight, as usual, during the hospital stay. The lactation consultants available through the hospital came in, and “everything looked good.”

But at his one-week appointment, he had lost more weight, and they were concerned. I said that breastfeeding was going well. He fed a lot. Someone watched a feeding, and they saw nothing that would suggest any problems.

They asked me to add pumping to encourage my supply.

So, I started pumping after feeds. And when I tell you I got nothing, it was a couple of drops. Maybe ½ tablespoon. My mom was reassuring and said that it was after he fed, which means he got a whole feed.

But after a couple more days, we had a weight check. He didn’t gain as much weight as they wanted for feeding as much as he did. So, they did a weighted feed, and he only gained an ounce after an entire feed.

Making the transistion to formula

They sent me home with formula, and I was so extremely sad. My husband and mom were already concerned that I was feeding non-stop, but I felt in my soul that the nursing part of our journey was okay. This was how it was supposed to be, and I was prepared to do it for my baby boy.

My mom went out and bought bottles. We mixed the formula up, and he drank three ounces in 15 minutes. Then he slept for two hours (!). I pumped after his bottle feed and got maybe an ounce.

Over time, every pump was less and less. With every bottle feed, he attached more and more to it. I realized that the formula and bottle were giving him what I couldn’t. And, by week three, we had transitioned completely to bottles.

Read next: Difficulty Bottle-Feeding Baby? These Tips Will Help

Why a breast reduction can affect breastfeeding

During that time, I found out that there are different ways to complete a breast reduction. Quite simply: one way saves as many ducts as possible, and the other, unfortunately, doesn’t.

My surgery was 10 years ago, though, and I know that procedures and knowledge on effects change constantly. I didn’t push into my own surgery procedure because I knew it wouldn’t change how it impacted my nursing journey.

Editor’s note: if you want to read more about the science behind how breast reduction can impact breastfeeding, please read this study. It states that breastfeeding success after a reduction range from 4% to 100% depending on the preservation of the column of parenchyma from the nipple-areola complex to the chest wall.

A lack of formula and bottle support

Instead, I was focused on my new journey, which didn’t end when I popped the bottle in his mouth because another new challenge emerged.

Because I couldn’t breastfeed, I wanted to do bottle feeding in the best way I could.

But something was different. I had a lactation consultant available during my breastfeeding journey, but once I mentioned the word “bottles” was, I lost all support.

The consultants told me the bottle they liked and that it didn’t matter what formula I chose. I was told to “just put the bottle in and feed.” If only it were ever that easy.

Although I was devasted about my breastfeeding journey, I was even more outraged about bottle-feeding parents’ lack of education and guidance.

The bottle type does matter, and the formula type matters and how you hold the baby, how the bottle is positioned, and more importantly, how to bond with your bottle-feeding baby matters. It all matters.

The bottle type does matter, and the formula type matters and how you hold the baby, how the bottle is positioned, and more importantly, how to bond with your bottle-feeding baby matters. It all matters.

Read next: The Must-Know Basics of Preparing Formula for Your Baby

Using my personal challenges to help others

Through my education as a speech-pathologist and having worked with babies who struggled with feeding difficulties, I noted all of these things. I taught myself everything there is to know about formula and bottle-feeding.

For the parents out there reading this, if your daughter ends up getting a similar procedure as me, be sure to ask the questions and find a doctor who supports the possibility of future breastfeeding.

As the patient, at 19, would it have mattered what he said about breastfeeding? Probably not. But as a mom for my daughter, I will do what I can to protect that possibility for her. What she chooses is hers.

It is said that once a reduction is completed, it is possible for ducts to grow back together and that the nerves can regain function.

Although not thorough, evidence-based research, I have read that after a breast reduction, each subsequent breastfeeding journey can be better and last longer. Honestly, I didn’t want to go down that rabbit hole too much as I had learned to love bottle feeding.

So far, my husband has cut me off from more kids, so who knows what I would be able to do for my fourth babe. Only time will tell, I guess!

For more resources on feeding your baby, browse all feeding articles. 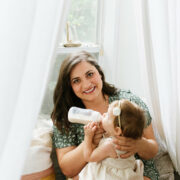 Mallory Millet is a Speech Pathologist who specializes in pediatric feeding disorders. Through her professional work and the lack of support during her own babies’ feeding journeys, she created The Feeding Mom. Here, she provides in-person and virtual support to empower parents through their feeding journeys locally and worldwide. Her philosophy is: every parent deserves to love feeding their baby. She is married and a mom of three under the age of four. She currently lives in Baton Rouge, Louisiana.

Yoga for Breastfeeding? How This Practice Can Help Your Journey

How to Stop Night Feedings: A Step-by-Step Guide

What is a Postpartum Doula and What Do They Do?

Postpartum Nutrition and Its Affect on Mental Health, Your Period, and Beyond

What to Know About Pumping While Traveling Without Your Baby