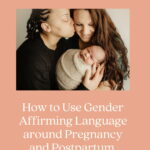 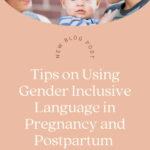 You might have stumbled upon terms like “birthing person” while reading a pregnancy or parenting article. So, what do these words mean, and why should we use them?

In general, using inclusive language like this marks a necessary shift in how we view gender identity, pregnancy, birth, postpartum, and parenting. Let’s dive in.

What is inclusive language?

Inclusive language is gender-affirming. It considers the wide range of identities and experiences of people and families.

This school of thought contradicts what many of us were taught about gender and sexual identities, but not all people who have periods are women. Not all people who give birth are moms or want to be called mama.

Inclusiveness doesn’t mean that you shouldn’t ever use the word “mama.” Instead, you don’t assume a pregnant person wants to be called a mom.

Similarly, talking to a parent, you don’t assume they are part of a couple with a husband and wife because that isn’t an accurate reflection of relationships today.

Why should we use inclusive language?

Inclusive language is accepting and validating of others’ experiences. Imagine, if you identify as a woman, reading a book that only uses male pronouns, like he. That feels isolating. Birthing people who don’t identify as women feel the same way: left out and frustrated.

It’s also important to use inclusive language to set an example for children. I don’t want my children to make assumptions about people, their identities, and their families. So, if I’m referring to another child’s caretakers, even if it’s a character in a book, I use the terms “grown-ups” or “mommies or daddies.”

Inclusive language can also educate others who don’t know about it or fear it. Unfortunately, topics like pronouns and gender identity have been politicized and vilified. By modeling inclusive language or taking a moment to explain its importance, we can plant seeds and pave the way for change.

How can we use inclusive language?

First, never assume you know someone’s gender identity based on appearance; I use general terms like person or child until it’s confirmed. If you’re ever unsure what words to use, just ask. It’s better to ask than to use the wrong ones.

It might feel awkward initially, but I avoid the simplified boys/girls with my children when we’re talking about private parts. Some general terms can include:

Second, use inclusive language when referring to a large group. For example, if you speak with a small group of friends that you know all identify as women and prefer to be called moms, use mom.

However, if you’re speaking about people with children in general, use an inclusive term like birthing people or parents.

When it comes to birth, you can use terms like birthing person, birth parent, or pregnant people. For partners, instead of assuming a partner is a husband, use words like supporting parent, support person, or co-parent.

How can you handle people who don’t like inclusive language?

The conversations about inclusive language can easily become charged because of hate and misunderstanding. Here are a few ways I handle those disagreements.

First, I validate people’s experiences and terminology. If someone gets frustrated when I use a term like cis-gendered (or someone who identifies with the gender they were born with), I acknowledge that they feel uncomfortable by saying, “I get that terms like that feel new and weird when you didn’t grow up with them.”

Then, I explain how much progress has been made and why that’s important by saying, “We know so much more about gender and sexuality now. That doesn’t cancel out your experiences or your gender identity and pronouns. It’s making room for others who have been left out.”

If people are open to it, I ask why they feel angry, defensive, or closed off. Often, people will share their experiences, and we can discuss them.

I always try to end by emphasizing that their identity isn’t being taken away: “Remember that including other people and validating their identity doesn’t cancel yours out or mean yours is wrong.”

So, pay attention to which terms you use in conversation or which are in the books you read to your children.

And when, not if, you mess up, acknowledge it, and try to do better the next time. We are all still learning; simply being open and willing to listen, learn, and grow can go a long way. 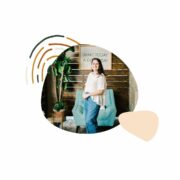 As a postpartum doula, teacher, and mother, I’m here to streamline the newborn learning curve and help birth parents, partners, and other family members. There isn’t one way to have and raise a little human. I’m here to guide parents to find their way to become confident parents.

What to Know About Pumping While Traveling Without Your Baby

Stay-at-Home Mom with Resentment Towards Your Husband? Try This

Co-Parenting with Different Parenting Styles? Here’s How to Make It Work

Experiencing a Relationship Breakdown After Baby? Listen In

Adjusting Your Family to an Adopted Newborn Baby

How to Find a Surrogate: What You Need to Know

Maternal Gatekeeping and The Dark Side of “Doing It All”